In response to new challenges in the chemical processing industry, Kaneka North America embraced a vision of the future to provide all their current and potential supervisors with skills to improve their leadership abilities. TDS and Kaneka North America together piloted the Front Line Supervisor Development program (FLSD) over a nine-month period. This case study follows the story of one superintendent as he guided his supervisors through the program. First, we’ll look at the methodology used before we tell Les’s story.

TDS uses high impact learning1 in the design and development of its training programs. Typically, in traditional training programs (figure 1) the full responsibility for learning falls to the trainee:

Bob, we’re sending you to a workshop on communications.
You need to work on how you talk to your subordinates.

Bob attends the training event and returns to work with a few new tools for his toolkit. His boss asks him how the workshop went and he tells him it went great! He learned some new things and he is sure his communication skills are going to improve immensely. 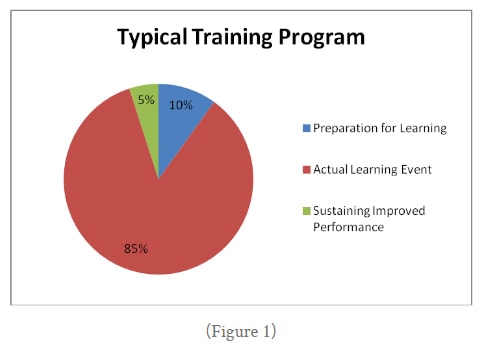 What happens from here can vary, but usually within a short period of time, something like this will occur: Bob tries out a few of his new techniques on people and they aren’t well received. They walk away scratching their heads wondering where the old Bob is. Maybe Bob didn’t use the techniques perfectly and came off sounding a little odd. Either way, Bob is quickly discouraged and neatly folds up everything he learned in the workshop and puts it on a shelf choosing to resort back to his old methods.

Another possibility is Bob didn’t even know how to apply what he learned in class and, therefore, never tried. He was never prepared for the learning event and for what followed once he returned to his work site and neither was the rest of the organization! His people did not know what was going on with Bob. They could not support him without an understanding of what he was trying to do. Bob’s own manager could not assist in the learning process. Bob had no clear goals set and certainly no discussion on how to incorporate these new learnings once he returned. Poor Bob! He was just left hanging out there all by himself without any direction, support or accountability. What a waste of the company’s time and money.

When using a high impact approach, (figure 2) an organization spends its time and resources setting the foundation for learner success. In the case of the FLSD program at Kaneka, this meant preparing supervisors who were participating in the program, their managers and the organization before sending anyone to a workshop or training session. It also meant taking a different approach during and after the learning event. These are detailed below. 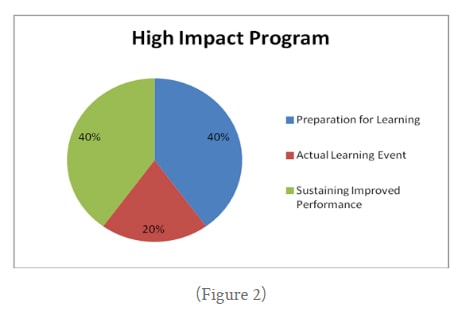 Initially, Kaneka North America and Les, a superintendent and the other managers, were charged with laying the foundation for success of the entire program. It consisted of four major components:

Awareness of how the process worked and an understanding of each person’s role and responsibilities were key to developing activities in Phases Two and Three. Communications went to everyone in the organization describing what the program was about, who was participating and what actions were expected from everyone else.

Then, a survey was dispatched electronically to the participating supervisors for their opinions on what skills and knowledge they believed they needed to become high-performing supervisors. TDS also wanted to know what skills they thought they already had and the types of support they needed from their managers and the organization to be successful.

The interviews with managers were designed to gain the same information from their perspective, but were also meant to lay the foundation for the role they would have in helping the supervisors achieve success in the learning process. Recognizing that they had a significant role was a first step for them, something they had not recognized before in the usual training process. Organizational leaders also had a role in this process. The entire company was responsible for helping these supervisors achieve their goals. Specific questions in the interview process were designed to challenge the managers’ thinking about:

The culmination of all the information from the surveys and the interviews was presented during the one-day managers’ workshop with data point differences highlighted. These differences were significant in some areas between skills and knowledge that supervisors thought they possessed and what managers believed they needed. Also, the data revealed to the management and leadership team that the supervisors wanted more than “support.” They needed feedback, opportunities to apply what they were learning and measures of accountability in order to be successful leaders in the company.

Les and his fellow managers attended the one-day session and were provided with a toolkit that contained summaries of each of the upcoming modules that their supervisors would attend. They also received talking points and activities that pertained to the techniques the supervisors would learn and suggested methods for holding their supervisors accountable to changing behaviors. They, too, were given their own tools to be successful mentors and coaches. The TDS facilitator practiced some of the techniques with the managers during this session. They practiced role playing one-on-one conversations and giving feedback, which helped the managers become more comfortable having these types of conversations themselves.

The learning event filled the timeline of Phase Two. Les’s supervisors attended seven days of instruction. Two modules were facilitated in an eight-hour session and, between each session, managers and supervisors met to discuss learnings: how to apply techniques, opportunities for future team development and how to grow the supervisor into a leader. This phase was completed in approximately seven months. This extended time period gave the manager and supervisor space to build and solidify their own relationship while having the time to practice what was learned in one session before moving on to something new. The TDS consultant worked with the management team during this phase to reinforce the organizational goals and to make sure a consistent approach was being taken with participating supervisors from their managers. While some managers were very active in their involvement, others were somewhat active and, in the case of one manager, not very active at all. The consultant met with the management team to reinforce the need for one-on-one conversations between each session, to set expectations and to design opportunities to practice techniques.

Les embraced this process and met with each of his participating supervisors on a regular basis. He stated that he felt a duty to both the company and his supervisors to deliver on his part. He wanted a positive return for investing time and money in sending them to participate. So, he set clear expectations and followed up on them.

He did face challenges. People didn’t embrace change. He later said that the change was even difficult for him at first. He had been in supervision for many years and the thought of doing things differently was going to take too much time and energy; but he recognized that it had to be done and that the managers and superintendents were going to have to set the example for others to follow. Les began his own journey of change, setting the stage for his supervisors to step up to the challenge, too.

Transformation happens slowly, but with patience and guidance Les’s team began to handle their issues differently. Communications started to improve, not only at the team level, but between shifts and departments. Attendance improved and daily involvement with operators changed as cooperation increased and conflict decreased.

Les used real opportunities that were occurring in the plant to help his supervisors change their behaviors. They became accustomed to his expectation-setting meetings and started thinking of ways to use the material that they were learning themselves. In one example that he shared, Les related an incident where an operator was having an attendance issue. Les called in the employee’s supervisor to discuss it with him. Les began relating how he thought the issue should be resolved and the supervisor stopped him. The supervisor said that he had a different idea based on what he had learned in the FLSD program that he’d like to try. He wanted to bring the issue back to the operator and put the onus on him to resolve it. He told Les that the real issue was the operator’s to solve, not theirs. If the operator did not assume responsibility for the problem, he would not feel responsible for the solution. The supervisor was confident that he could assist in providing viable solutions with the operator, if needed; but that the operator should take a stab at working through a solution himself first. The supervisor was right. When presented with the problem and its impact on the team, the operator took responsibility and offered a solution that he could be accountable to in the future.

The final step in the journey of FLSD, critical and many times forgotten in traditional programs, is the follow up and the sustainability phase. Learners tend to forget much of what they have learned if they aren’t given opportunities for application and measures of accountability. Shortly after the workshop sessions ended, TDS provided Kaneka North America with a follow up survey for both managers and supervisors that addressed:

The primary indicator for effective return on investment for this group and for future groups participating was whether the supervisors were using what they learned and whether managers were reinforcing it with accountability.

It was immediately evident that there was a direct correlation between how much the supervisors were using techniques learned in the program (and their success in using them) and the interaction they were having with their manager. The more application opportunities and feedback they had been given, the more willing they were to take chances and try something new. Those who were not as well supported had not applied as much. It was interesting to note that in several cases their excuse mimicked their manager’s – not having enough time. The people who made time also found the most success.

Les was concerned that his team might fall into some of the traps that are common to post training initiatives. He asked himself how he could avoid them and thought the right approach was to take his supervisor team off site and away from the regular turmoil of daily operations. They went to Galveston for several days for a “New Beginnings” retreat that he facilitated. They all participated in an activity in which they closed the door on the past by writing down all the old issues that ate away at their ability to move forward as a team. They spent time talking about things they could control, things that were not going to change, and validated how everyone was feeling about them. Then they symbolically wadded up all the issues and threw them away. Everyone felt as if they had been heard and agreed it was time to move on. Now the focus was on the future. People were ready to implement the changes that would sustain their learning and allow each individual to grow. They charted out a plan and then had a big cookout in celebration!

A retreat is one method for managing sustainability. Kaneka North America also employed lunch and learn sessions and project teams to resolve real issues within the plant and organization. Revisiting material, practicing techniques and continuing to find ways to be aware of development opportunities keeps the whole organization focused on performance.